Posted On January 9, 2014 By Ascher Robbins In Television

Some people never seem to get the message, so before we get started here, let’s get this out of the way: IF YOU HAVE NOT SEEN SEASON SIX OF SONS OF ANARCHY, DO NOT READ ANY FURTHER.

In other words: SPOILER ALERT!

Ah. Alright. We have that taken care of, so now we can dive headfirst into the dirty, bloody mess that FX’s poster child, Sons of Anarchy has become. Actually, I guess it’s been that way since its inception, and that’s why we love it: SAMCRO has never been a club based on beauty and diplomacy, but a shoot-first-ask-later brashness that tends to create three problems for every problem it solves. The ramifications of this impetuousness have never been greater than they are in season six, particularly in the soul-crushing season finale. It could be argued that of all the overarching themes present in Kurt Sutter‘s quintessential biker drama, the most prominent of all is the not-so-subtle nuance that every action, no matter how ostensibly insignificant, has a ripple effect which sets veritable avalanches of consequences in motion – both in the SAMCRO universe and in our lives. In season six, Sutter has brought all of his chickens home to roost, even those hatched long, long ago. The result? Hands-down the most brutal episode of the most brutal season in a show known for its brutality.

What makes a television show great – not good, but truly great – is character development. Breaking Bad was so fantastic because we witnessed firsthand the evolution of Walt, Jesse, and Co. every step of the way. We understood their virtues and foibles, their motivations and eccentricities. Kurt Sutter has managed to do the same in Sons of Anarchy. For the past few seasons, we were treated to various character evolutions. We saw our “hero,” Jax, get pulled deeper and deeper into the life of violence and deception that he long ago vowed to flee. We saw Tara go from committed Old Lady to sensible, desperate mother. We saw Clay Morrow go from infallible club dictator to a prisoner, and a desperate pawn in racially-motivated jail-yard brawls. We saw Juice try to take his own life and then coldly take the life of an innocent, we saw Tig somehow cheat death time and time again, we saw Bobby struggle with Jax’s leadership, we saw so much more. Not one patch, lawman, old lady, or croweater in the SAMCRO universe has remained static throughout the series (except for maybe Chuckie…minus his old habits dying hard).

In “A Mother’s Work,” the season six finale, several long-running storylines intertwine with tragic results. Needless to say, the most pertinent storyline was the season-long struggle between Gemma and Tara for control over the children – Abel and Thomas. We’ve been watching Tara come to her sensibilities and try to get the hell out of Charming for quite some time now, while we’ve simultaneously watched Gemma become increasingly unstable. Two opposing forces for the affection of Jax from the series inception, the two female leads find themselves diametrically opposed in “A Mother’s Work,” as Tara finally cooperates with authorities, ultimately leading Jax to turn himself in for supplying the KG9s in the tragic school shooting that opened this bloody, bloody season. But, in classic SOA fashion, Gemma gets a half truth from the perpetually well-intentioned Wayne Unser.

Gemma, wasted and reeling from her breakup with Nero in addition to Tara’s purported betrayal of the thing she cares about most (Jax? The Club? Either way),  acts with that patented Teller-Morrow cocksureness, deciding to take Tara’s fate into her own hands, convinced that Tara ratted Jax out. Gemma’s way of making sure her boys stay in the Charming cesspool is to prevent Tara from leaving town…which she accomplishes in a fashion that was horrendously violent even for this show. I’m pretty sure nobody feels sorry for Gemma anymore. That scene was just…no words. But that might not have even been the most surprising death of the episode. When Sherriff Eli Roosevelt hears the commotion from Gemma’s heinous crime, he comes running in, along with Juice – whose personal narrative reaches its tipping point when he promptly shoots Roosevelt dead and then clears the scene of any evidence that could condemn Gemma. Poor, fucked-up Juice. You can’t help but miss the happy-go-lucky goon from the first three seasons – before Roosevelt played the race card, before the “brick” incident, before the chains and trees, Oxy pills, and down pillows. Perhaps no character on the show has had his emotions fucked with more than Theo Rossi’s character. His character’s arc was every bit as important in this episode as those of Gemma Teller-Morrow and Tara Knowles-Teller.

Lost in the carving fork-induced madness was the implications of Nero’s changing attitude towards SAMCRO and his return to his racial allegiances. I’d wager that season seven is gonna feature a heavy dose of Jax being pitted against his once-partner. What remains to be seen is where Gemma will end up in the fallout of the tragedy…will Jax piece everything together? Will Nero pick Gemma over his cholo banger buddies? A lot could hinge on the deranged matriarch and who takes her back.

No matter what happens, after “A Mother’s Work,” we can be sure of two things: 1) Sons of Anarchy isn’t going to get any less-bloody, even with the club out of guns, and 2) The Jax Teller Story will not have a happy ending.

It’s a shame we have to wait so long for season seven. We need to get some resolution for the turbid mess in which Kurt Sutter left us to stew. 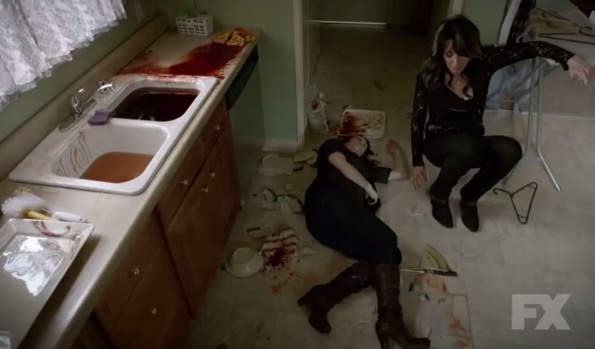 Not an uplifting finale for an increasingly brutal show. RIP Tara.