Posted On February 7, 2014 By Brian Wray In Television

If you frequently watch comedies on your Netflix (or your friend of a friend’s Netflix account…be honest) then you’ve probably stumbled upon it or at least had it listed in your suggestions. In my opinion, it’s one of the most underrated shows of the past decade. A first-person, point of view, buddy comedy program starring British comedy greats Robert Webb and David Mitchell. The name is Peep Show.

DISCLAIMER: I am not responsible for the ensuing all-day marathon that causes you to get fired from your job. Thus, I will not be held accountable for adding further to our country’s unemployment total. Feel free to complain to Mr. O in the White House, just leave me out of it. Or better yet, DO mention me. I could use the publicity….. okay now, back to the article.

You’re probably baffled that I called Peep Show a first-person point of view comedy, but that’s exactly what it is. Vantage points are exclusively from the perspective of characters. You see what they see. This must’ve taken forever to shoot. Actors would’ve had to get used to the idea of staring into camera lenses. But it plays into the quirkiness of the show. And after a couple of episodes, you’ll hardly notice it. 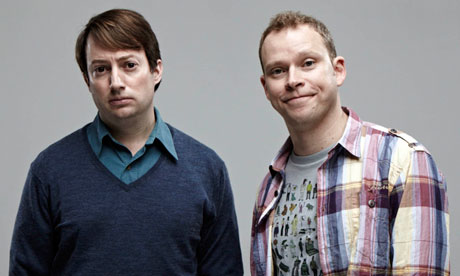 WHAT IS IT ABOUT?

The show follows the lives of two flat mates (that’s English for sharing an apartment; silly Brits). It’s a case of the odd couple, because Mark and Jeremy are as different as night and day. One is a 9-5 loan manager at the fictional JLB Credit Union, while the latter is an out of work, bedroom musician who is trying to catch his big break but lacks the brains and talent to succeed. As you can probably pick up on, it’s an hilarious, dysfunctional journey through relationships, jobs, and more than a few recreational drugs.  If you enjoy awkward situational humor, then this is your cup of tea (and crumpets).

Not only is the show superbly written by Jesse Armstrong and Sam Bain, but the acting further enhances each scenario. See, this show is governed by the brilliant acting principle known as ‘less is more’. Also known as the Robert Downey Jr. style of comedy. Yep, that means it’s pretty darn good. Let’s elaborate.

Subtle humor. It’s when actors are funnier by simply not acting. It’s when they merely react to another character, naturally. Sounds easy enough, right? Wrong. Watch any contemporary American comedy show (especially on network television) and you will see the most horrendous display of overacting that’s ever been done. It’s enough to make many of these programs unwatchable.  That’s why Peep Show delivers a breath of fresh air into modern comedy television.

I’ve recommended it to several friends, and guess what? They’re all hooked. Reason being? It’s funny. It’s funnier than anything on your television during prime-time. And it’s not hung up on politically correct sensitivities, like trying to fulfill racial/cultural quotas. It’s just funny. Too bad, ‘just funny’ has become such a lost art. Thank you Peep Show, for bringing it back. And sorry America, for making you lose your job.