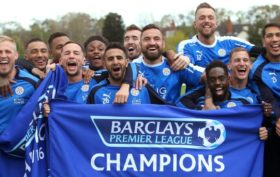 Posted On May 8, 2016By Brian WrayIn Sports, Sports Takes

Moneyball 2016: How Leicester City is the Oakland A’s of Soccer

A team with no money just won the English Premier League. Vegas had them at 5,000-1 odds. Nobody, including their mothers, picked them to win the title. But it’s clear to me how this happened. To hijack a line from the film Moneyball, “We are card counters at the blackjack table and we’re going to turn the odds on the casino.” Here’s what transpired… Leicester City flipped the script on the excruciatingly top heavy Premier League. A league in which 3 powerhouse clubs have dominated title wins for over 100Read More

Why I Would Make An Excellent MLB Manager

Modern baseball managers are wimps. They treat their players like prized hams, and make decisions that defy all common sense and logic. But it’s all in the name of keeping their job. Because job security is non-existent, managers are never allowed to truly relax. They make decisions that they can explain away in job interviews the following winter. It’s time for an overhaul. I would be the greatest manager that major league baseball has ever seen. Most of a manager’s failures are the result of doing too much. That’s whyRead More