Posted On January 1, 2014 By Oliver Ristow In Sports, Sports Takes

Prior to the season there were high hopes for the Chiefs, and many believed they were only a quarterback away from contending for the Super Bowl, because that’s how good Jamaal Charles and the Chiefs’ defense was believed to be. While Charles didn’t disappoint (his fantasy owners know what I’m talking about) the D hasn’t been as good as advertised, ranking 24th in total defense. Alex Smith also didn’t appear to be the answer at quarterback either, spearheading a unit that finished just 25th overall.

The Chiefs started the season 9-0 before losing five of their last seven. They also managed to beat just one other playoff team during the regular season—when Mike Vick (who?) was still starting for the Eagles and the team was emotionally charged for Andy Reid’s return to Philly. The Chiefs have been exposed by other contenders as the frauds they really are. If they figure to keep their Super Bowl pipe dream alive, bookend pass rushers Tamba Hali and Justin Houston will have to return strong after missing Week 17.

Indianapolis has put together a nice season despite an injury to Reggie Wayne that figured to hamstring the offense. In his absence, the Colts have witnessed the rise of  T.Y. Hilton, who absolutely shredded the Seahawks’ vaunted “Legion of Boom” en route to a victory in Week 5. The Colts do have ugly losses on the resume, which include a 38-8 drubbing against the Rams and a 40-11 disaster against the Cardinals.

The Colts have adopted the personality of their quarterback Andrew Luck—despite not being overly-flashy (like Luck), this team, has shown a lot of moxie and has found ways to win because guys are stepping up and flat-out overachieving. The whole team seemed to hit their stride at the end of the season, winning their final three games by a combined score of 78-20, including a dominating team-wide effort during a 23-7 victory over these same Chiefs in Week 16. 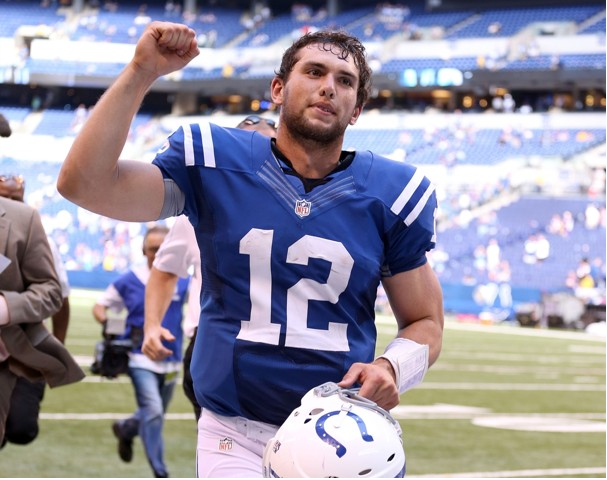 Andrew Luck and the Colts hope to beat the Chiefs for the second time in a month.

The New Orleans Saints might be the strongest sixth seed in NFL history, finishing the regular season with offensive and defensive units each ranking in the top 4. Had the Panthers lost to the Bucs in Week 17, this team would be the second seed in the NFC. Saints fans must be very disappointed not to have a single home playoff game this season, especially since the Saints went 8-0 at home.

Perhaps the biggest story in New Orleans is the resurgence of a defensive unit that gave up an NFL-record 7,042 yards last season. With Drew Brees still doing very Drew Brees-ish things, like throwing for 5,000+ yards and almost 40 TDs, a defense that can really contribute to a victory is almost a luxury.

If Philly figures to have any chance in this game, they’ll have to protect their putrid defense (ranked 3rd worst in the league, worst against the pass) by using their top-ranked rushing attack to eat the clock and keep Brees off the field. The Eagles also have the home field advantage in this contest, which cannot be understated against the Saints team that went 3-5 on the road. And of course, more weather like what the Eagles saw at home against the Lions earlier this year wouldn’t hurt.

In Philadelphia, all the focus has been on second-year quarterback Nick Foles who led the Eagles to an 8-2 record and the division crown after defeating the Cowboys in week 17, all while throwing 27 touchdowns to only two interceptions. Still, Drew Brees and Co. will outpace Foles and Shady McCoy due largely to the Eagles deficiencies on defense. 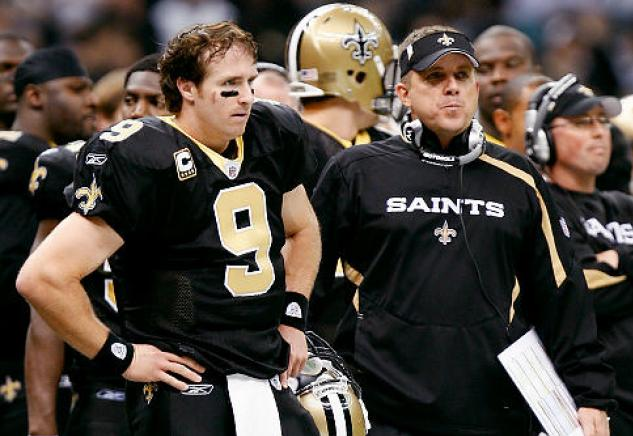 Can Drew Brees and Sean Payton win a road playoff game for the first time?

The Cincinnati Bengals have found themselves on the losing end of Wildcard Weekend games each of the past two years. They’re hoping to buck that trend this season after wrestling the division crown from the Ravens and Steelers for just the third time since the NFL Realignment in 2002.

The Bengals are as explosive an offense as you can find in the NFL, led by Future First-Team All-Universe wide receiver A.J. Green and explosive rookie Gio Bernard coming out of the backfield, the Bengals can hurt you in a variety of ways. However, as long as QB Andy Dalton continues to put on inconsistent performances, there will always be a creeping doubt about whether or not the offense has what it takes to win it all.

The Bengals defense ranks 3rd in the NFL and is led by a very strong front seven which accumulated 38 sacks this season. Of course stud defensive tackle Geno Atkins is on IR, and his efforts will be missed against Philip Rivers. Still defensive ends Michael Johnson, Wallace Gilberry and Carlos Dunlap will be able to pressure Rivers into making mistakes against a secondary ranked 5th against the pass.

Had Peyton Manning not been on a mission from God to rewrite NFL passing records this season, a lot more people would have been talking about Philip Rivers. But when you play in the same division as a quarterback who is having the best season any quarterback has ever had, it’s tough to notice number two. Rivers very quietly piloted the fourth best passing attack for the Chargers this season, throwing for nearly 4,500 yards and 32 touchdowns. Tight end Lardarius Green emerged as a legitimate threat in the last quarter of the season, pairing with Antonio Gates to give the Chargers a poor man’s version of New England’s Gronkowski and Hernandez (coughmurderercough).

The Chargers defense is far less impressive than the Bengals, ranking 23rd overall. If Andy Dalton gets rolling early and the Bengals do a good job of keeping the defense off-balance while utilizing both Bernard and BenJarvus Green-Ellis, San Diego will struggle to keep the Bengals out of the end zone. Defense prevailed when these two teams last met in Week 13, and if it comes down to defense again, the Chargers can’t match Cincy’s talent. 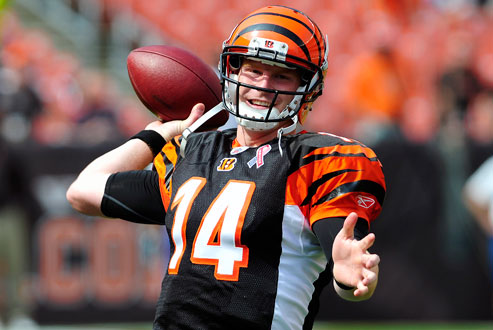 After an up-and-down season, Andy Dalton will look to lead the Bengals to an elusive playoff win

The second of the NFC Wildcard games features one of the better matchups of the last couple seasons, with the Niners and Packers meeting three times since September of 2012. Unfortunately for the Cheeseheads, the Packers have been unable to win any of those contests, losing by an average of 10 points.

In the past, the Packers have relied almost exclusively on Aaron Rodgers to win games, but because Rodgers missed seven games with a broken collarbone this season, the Packers were forced to finally develop the rushing attack they’ve been missing seemingly since Ahman Green left town (or at the very least, since Ryan Grant was injured). Rookie RB Eddie Lacy has had a nice season for the Pack, posting 1,100 yards and 11 TDs. As evidenced by his heroics in Week 17 though, the Packers will still live and die on Rodgers and the receiving corps. The Packers defense has routinely performed poorly on the season, and with OLB Clay Matthews sidelined for this game with a thumb injury, expect another lackluster effort from the Green Bay defense.

Despite Green Bay’s new rushing attack and the return of Aaron Rodgers, the Niners should keep their winning streak against the Packers alive. The defensive unit is as good as anticipated, ranking in the top-seven in nearly every measurable category.

The Niners passing attack has been less than formidable, which was surprising given the addition of WR Anquan Boldin in the offseason. Boldin and TE Vernon Davis are still more than talented enough to pose a serious challenge to the Packers’ underperforming secondary, but running back Frank Gore, Kaep and the rest of the backfield are the third-best rushing attack in the league, they’ve had no trouble toasting Green Bay on the ground in the past, without Matthews it should be that much easier. 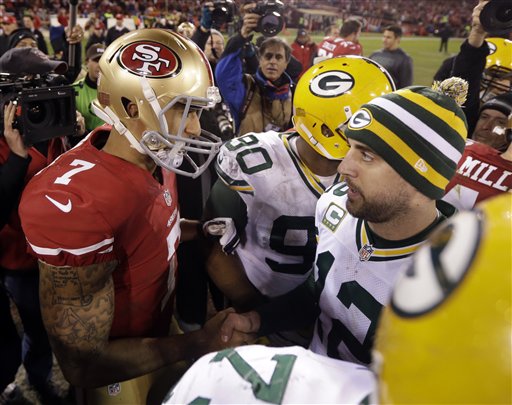 There is no love lost between the oft-opposing Rodgers and Kaepernick.

Oliver Ristow is a sportswriter for Writtalin. He played football and hockey at Pacific Lutheran University before graduating from Colorado State University. He is an avid outdoorsman and occasionally, he brushes his teeth in the shower. You can email Oliver at: oliverr@writtalin.com