Posted On February 1, 2014 By Ascher Robbins In Gambling Life, Sports

It’s finally time for the moment we’ve been waiting for since August: Super Bowl XLVIII. The Denver Broncos against Seattle Seahawks; the two teams we’ve expected to go this far from the beginning. And while I’ve already broken down the Big Game in detail in another column, I wanted to give y’all some gambling advice for Super Bowl Sunday. I’ll begin by giving you my ATS and Over/Under picks, and then you’ll get the added bonus of getting some suggestions for ridiculous prop bets you can make – such as, what kind of hat Bruno Mars will wear during halftime (Fedora, duh).

I kicked major ass in the AFC and NFC Championships going 2-0, so I got back on track. At 4-4-2, you’d be exactly EVEN if you’d been listening to my insights! Wooohooo! If you ain’t losing, you’re winning. As always, the game pick is against the spread, not a straight-up prediction.

At the time I’m writing this, Denver is favored by 2.5 points, and the over/under is 48. This post will reflect those numbers. 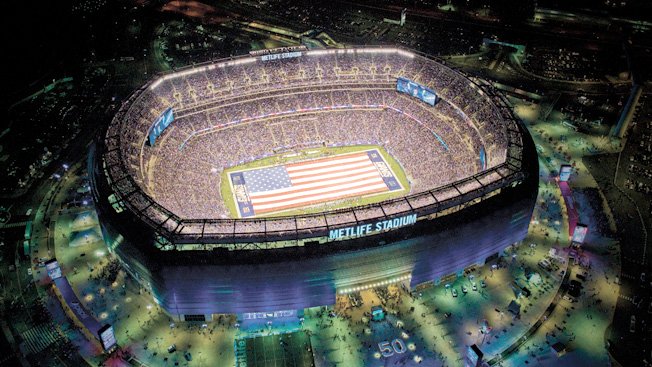 MetLife Stadium: The setting of the showdown.

Again, if you want a detailed breakdown of every possible factor in the Super Bowl, I’ve already written one, which you can read here. So, here I’m mostly gonna focus on the relevant trends and stats that will be in play on Sunday. Obviously, the Broncos and Seahawks are pretty well-matched, as the Broncos will put up the #1 offense against Seattle’s #1 defense. Meanwhile, the Seahawks’ middle-of-the-pack passing offense will go against a decimated, weak Bronco secondary, while their formidable run game will be tested by a pretty good Denver run defense. Every facet of this game has the makings of an even matchup, with no team holding a significant edge anywhere. So, let’s focus on the data.

To begin, we’ll start with road records, since this is essentially a road game for both teams, albeit without either team getting a true home field advantage. While both teams went 6-2 on the road this season, Denver has been consistently better on the road over the last few seasons. In Pete Carroll’s tenure, the Seahawks have gone only 15-20 on the road. In John Fox’s stint with the Broncos, Denver has gone 17-8 in road games. Both of these teams are significantly better at home, but it appears that the Broncos are the consistently better road team.

As for the weather factor: I think it’s a push. Denver and Seattle can both get pretty cold, and neither team will be unfamiliar with whatever elements the Heavens above MetLife Stadium throw onto the field. And while the argument can be made that inclement weather favors the Seahawks and their rushing attack over the Broncos’ aerial assault, it really isn’t that simple. What people forget is that Seattle’s run defense has not been infallible this year, while Knowshon Moreno and Montee Ball have both had decent seasons running the rock for the Broncos. If push comes to shove in a snowstorm, I think both teams will be able to run. After all, in a windy, cold game in New England in November, Moreno had a career day, rushing for 224 yards. The Broncos will be fine if they have to run the football.

Gambling trends seem fairly inconclusive and evenly-matched here, too. The Broncos were 5-3 ATS in road games, the Seahawks were 6-2. In games against the AFC, the Seahawks were 2-2 ATS, while in games against the NFC, the Broncos were 3-1. On the season, the Broncos have gone 11-6-1 ATS; the Seahawks have compiled an ATS record of 12-6…Point is, even from a gambling standpoint, this game is a toss-up – and the over/under is no different. In games the Broncos have played this season, the total has gone over in 11 games, and under in 7. The Seahawks were polar opposites, having their games go over just 6 times, and under 12. This is certainly one giant muddled mess of data.

So, at the end of the day, I’m going with my heart here. I’m an unapologetic Denver fan, and I have to go with my boys. And hell, in my Super Bowl preview, I said this one would be 27-24. That’s 51 points. Not changing my mind. Read ’em and weep. 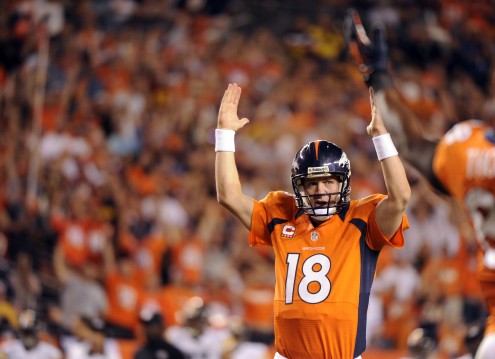 Count on Peyton getting another ring on Sunday.

And now, for an exclusive look at some of the ridiculous bets you can make on Super Bowl Sunday…with my picks! If you’re awesome enough to actually make these bets, you can do so on Bovada.

What will Bruno Mars be wearing on his head at the start of his halftime performance?

The Pick: FEDORA (Even Money)

Rationale: Let’s be honest. All this one takes is Google image search. It is harder to find pictures of Mr. Mars without a fedora than with one. It might be cold, sure, but on the biggest stage, Bruno is rockin’ a fedora to get things started. Easy way to make even money here. FEDORA. Book it. 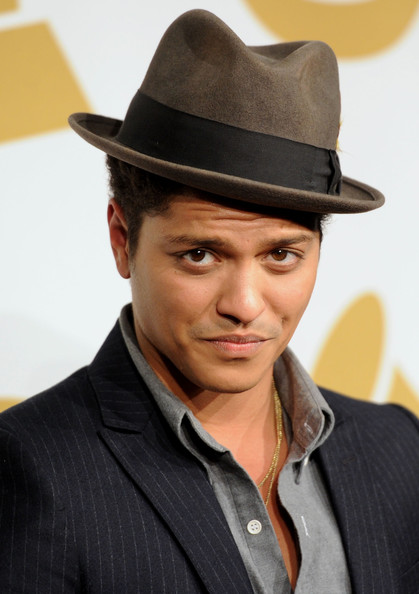 How many times will Eli Manning be shown on TV during the game?

Rationale: This is easy. You REALLY think they’re gonna show Peyton’s little bro, in his home stadium, watching his big bro try to match his Super Bowl ring total JUST ONCE?! No, you don’t. Eli will definitely be shown more than once. Probably more than 5 times. Easy pick. OVER. (Bonus: DEFINITELY pick the over on Archie Manning being shown more than once, too. Hell, parlay Eli and Archie getting some quality face time.). 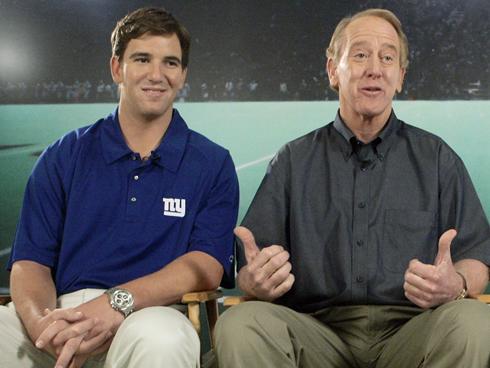 The other Manning men will get plenty of time on air.

Will Michael Crabtree mention Richard Sherman in a tweet during the Super Bowl from kickoff until final whistle?

Rationale: Well, the Crab isn’t a very active member of Twitter, but he DID use it to talk some smack about the self-proclaimed best cornerback in the game after their well-publicized battle in the NFC Championship. I can definitely see Crabtree rubbing it in and further questioning Sherman’s greatness if he gets beat for a touchdown in this game. That chance is definitely worth taking 3/1 odds. YES.

Film don’t lie… @nflnetwork @espn pull up the tape of that game and show me where this guy is the best? #fake #fake #fake

What will be higher: Broncos first half points or USA Gold Medals in the 2014 Sochi Winter Olympics?

Rationale: The USA tallied 9 gold medals in the 2010 Winter OIympics, 9 in the 2006 Winter Olympics, and 10 in the 2002 Winter Olympics. Peyton and his high-flying offense will put up at least 10 points in the first half. Broncos are the pick, with confidence. 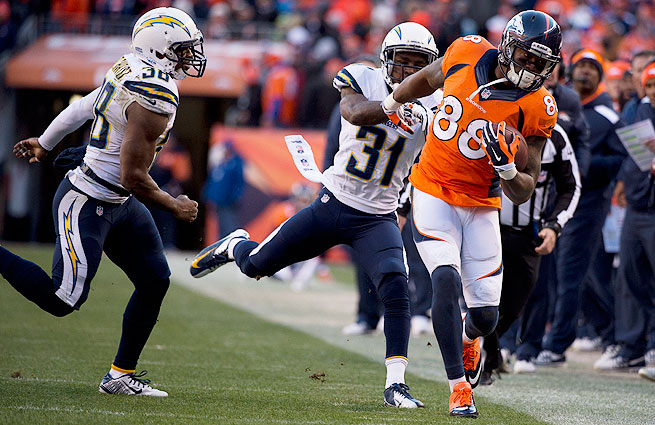 10 points isn’t asking that much from THIS offense.

Will the announcers say the word “Marijuana” during the game?

Rationale: YES, they will. But NOT because the two states involved in this game have legalized pot. I think the weed word will be said while discussing Roger Goodell’s recent comments about the drug. At 6/1 odds, bet on marijuana. 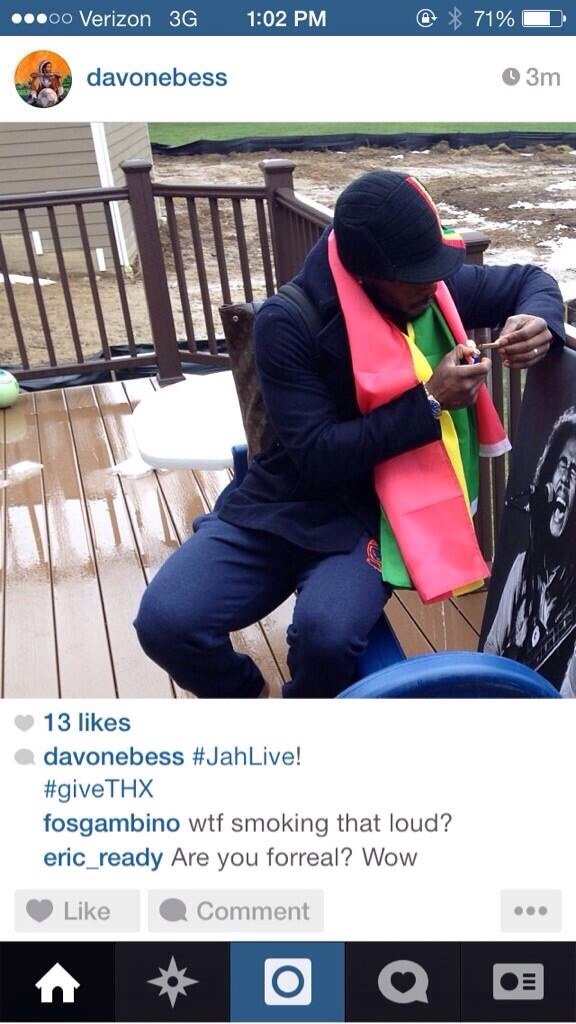 Count on hearing the ‘M’ word, even in a game without Davone Bess.

Happy Super Bowl viewing, everyone. Here’s hoping the game is as fantastic as we’re expecting it to be.