Posted On January 11, 2014 By Ascher Robbins In Gambling Life, Sports

NFL Divisional Weekend is upon us, and as we inch closer to the Super Bowl, the teams get better and the stakes get higher. Here are my predictions for a Divisional Playoff weekend full of regular season rematches.

Just to be clear, these are not predictions on who will WIN the games this weekend, but rather who will cover the spread.

Here are my against the spread picks for the NFL Divisional Round games. HOME TEAM is in CAPS, and lines reflect Saturday, January 10th.

I like the Saints. I like Drew Brees. I like Jimmy Graham. I like their rejuvenated defense. I like the fact that they finally got the monkey off their back. But I do not like Sean Payton’s team going into Seattle and pulling off a shocker in a stadium that gets so loud it causes fucking earthquakes. I think the Saints are even less likely to win this game based on the matchup between these two teams in the same venue just over a month ago. In case you missed it, the Saints got absolutely thrashed by the Seahawks, losing 34-7, in a game that didn’t even feel that close. The Seahawks are NOT invincible at home, as Arizona succinctly proved three weeks ago, but I really can’t see a Saints team that struggles outdoors, just won its first away playoff game in franchise history, and is playing a second straight road game in cold weather getting out of this one on top. I didn’t see enough out of the Saints in their narrow victory over Philadelphia to think that they’ll even stay within single digits here. Granted, Drew Brees can hang with the best of them, but winning in Seattle in January is asking too much. 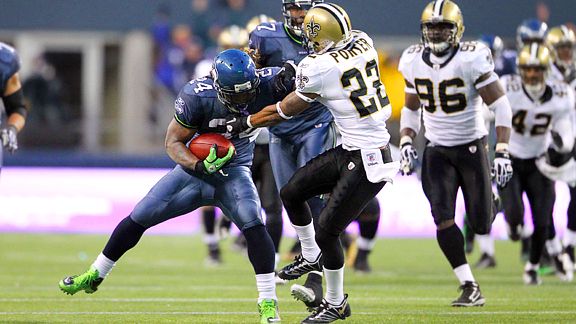 Will we see Marshawn Lynch destroy the Saints yet again?

Ah. Quite the familiar AFC playoff matchup we have here, despite the obvious changing of the guard in Indianapolis since the last time these two teams faced off in a January showdown. Even without Peyton involved, this game promises to be full of intrigue. As I noted in last week’s Wild Card preview, this Colts team has been the most Jekyll-and-Hyde team in football this year, with arguably the three most impressive victories that any team can boast (Seahawks, Broncos, 49ers) and also three of the most puzzling losses of any contender (40-11 to Arizona, 38-8 to St. Louis, 24-20 to Miami). So what did the Colts do last weekend? They exemplified their ridiculously erratic nature perfectly, digging themselves a 28-point hole in the third quarter…only to rally and beat the Chiefs by one.

The Patriots, meanwhile, have had their share of highs and lows as well…and unfortunately for them, they’ve looked far more impressive with injured tight end Rob Gronkowski than without him. The Patriots have had a good season, but they have been far from dominant. The Patriots have eked out plenty of close victories, but rarely blew anyone away. They also lost to the Jets and Dolphins. Eww. The main reason the spread is so high here is the fact that the Patriots are 8-0 at home this season. I’m not impressed. In that 8-0 record, the Pats have that RIDICULOUS comeback over Cleveland, the almost-as-crazy comeback over the Saints, a 3-point slopfest over the Jets, and so forth. Appearances can be deceiving.

The Pats are not getting it done this year with their (arguably) best weapons in street clothes…or jail clothes. I’m picking a cover AND the upset for the Cardiac Colts. 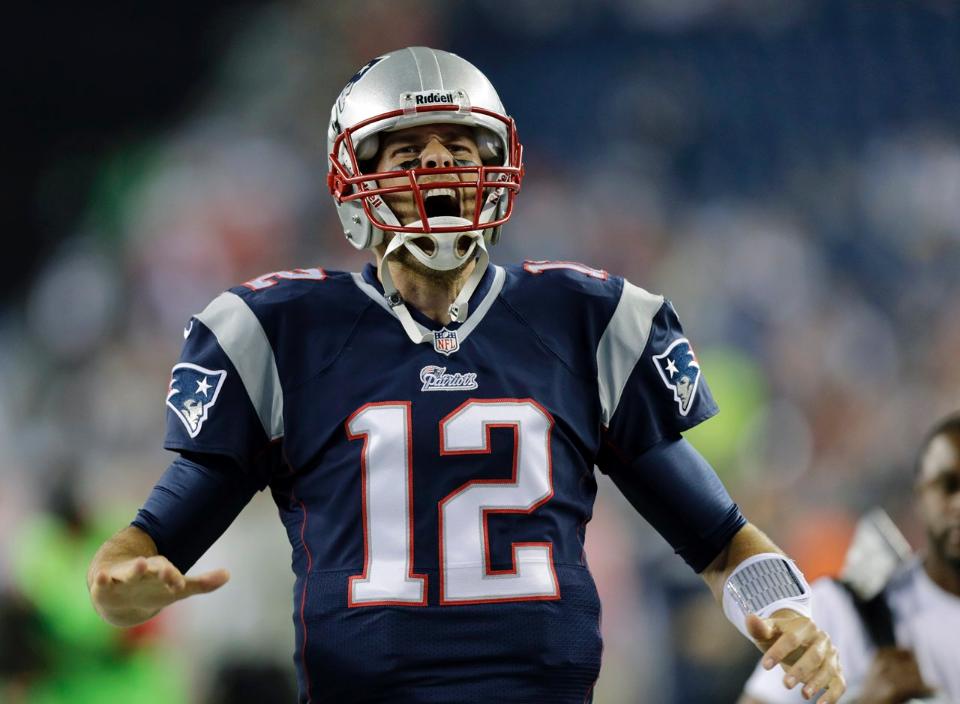 You heard it here: Tom Brady isn’t gonna be happy on Saturday night.

This one was the hardest to pick of any game this weekend because these two teams are so friggin’ evenly matched. Both teams pride themselves on defense. They both want to run the football. They both have explosive quarterbacks, and to some degree, both have iffy wideouts. They’ve already played once this year…and that game was decided by one freaking point. They both have been HOT down the stretch. I can’t choose. This game is, for all intents and purposes, a tossup. And when you have a tossup…you take the points. For that reason, I’m going with Cam and the Panthers here. 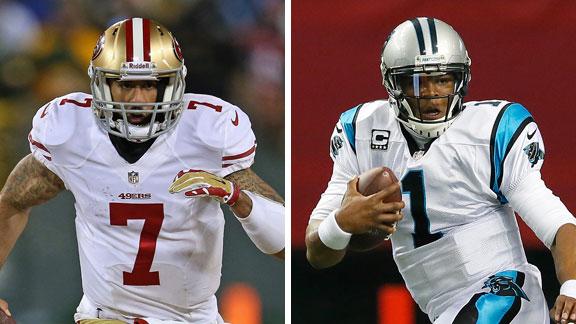 Just like the Cam or Kap argument, this game is too close to call.

If you know me, you know that I am an unapologetic, hardcore Denver Broncos fan. But let me say, this pick isn’t due to bias. In fact, I’m absolutely terrified of this game, and of the San Diego Chargers after what happened on December 12th. But I don’t think that Phil Rivers and Co. are gonna hang around in this one for a few reasons. First of all, when the Chargers won in Denver about a month ago, they were fighting for their freaking lives while the Broncos were debating whether to clinch the one-seed or fall to the two-seed. Yeah, both teams had motivations but the Chargers NEEDED that game more…and played like it. Secondly, Denver was without Wes Welker in that game, which was a much bigger problem than Andre Caldwell could fix. Caldwell had a decent game, but the absence of Welker doesn’t show up on the stat sheet as much as in the gameplan. Welker opens the field up and provides a safety net (I know, I hate the cliche too) for Manning on every play. Without him, the Broncos offense is inherently different, and this weekend, I have a feeling we will all see the Welker Factor at play in a major way. Thirdly, the last matchup between these games was on a Thursday night…a night known for sloppy, uncharacteristic performances. Hard to read too much into it. But the bottom line is this: Peyton has something to prove, and he’s not going to let the Chargers win at Sports Authority Field twice in a month. No way. It ain’t gonna be close. (Knocking on wood). 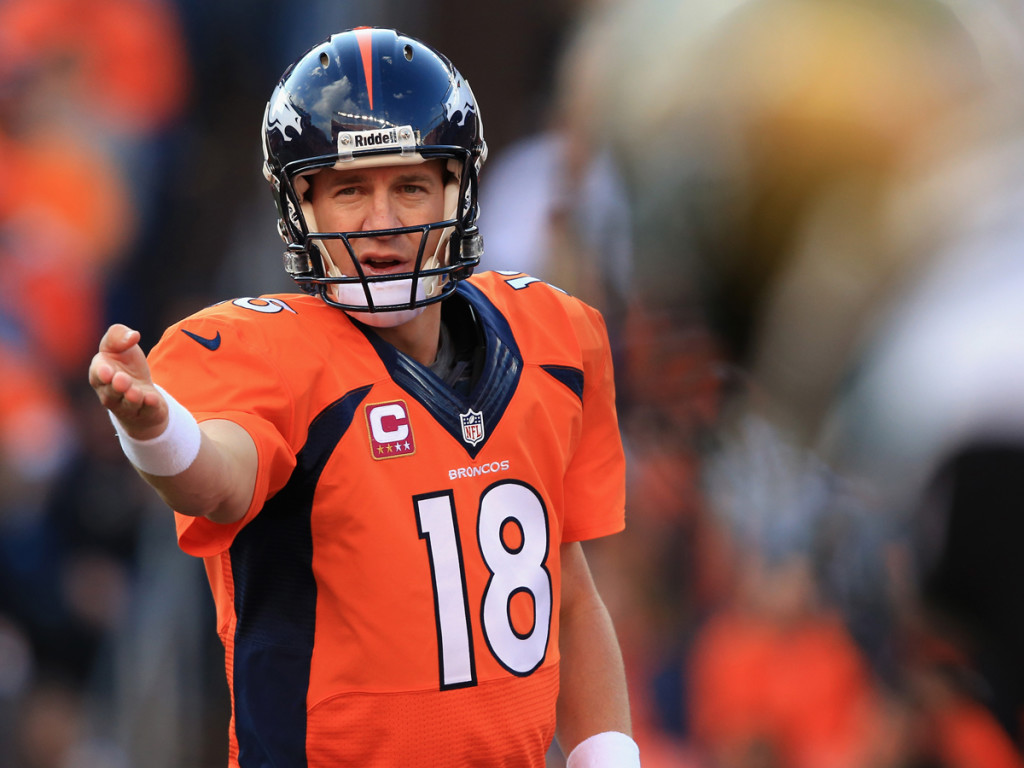 PFM is NOT losing to the Chargers at home twice this season.