Posted On January 16, 2014 By Oliver Ristow In Sports, Sports Takes

It’s weekends like this upcoming one that make being a sports fan wonderful. In one game, you’ve got two of, if not THE two greatest quarterbacks of all time fighting for a chance at one more ring to help finish cementing their legacies. In the other, you’ve got two of most exciting and dynamic young quarterbacks in the game, eager to begin creating theirs. It’s also worth noting that the four remaining teams were by most accounts, the favorites to make it this far at the beginning of the season, a fairly rare occurrence in today’s NFL. When you look at the matchups for the NFL Conference Championship Weekend, it’s tough to imagine that the actual Super Bowl will be able to compete with this Sunday’s games and storylines.

In the AFC Championship game, we’ve got Denver and New England, or as it’s more affectionately known, Manning vs. Brady. All the talk leading up to the game will be about the history of matchups past and what it will mean to each of their legacies if they win or lose this game.

Both Manning and Brady have to win the Super Bowl this year. Anything less will be a total failure. If Manning fails to win, he will finally cement his place in history as the greatest REGULAR SEASON quarterback of all time, and that’s it.

If Brady fails to win, he will be quickly approaching a DECADE (has it really been that long?!) since his last Super Bowl victory. More importantly, if Brady wins this weekend and then loses in the Super Bowl, he’ll drop his record in the big game to a very pedestrian 3-3. At which point, the discussion on Brady will no longer be about him being the most clutch QB in league history.

Of course, he’ll have to get there first, and he’s got his work cut out for him in trying to keep pace with the best offense in NFL history. In recent weeks, Brady and the Pats have turned to their stable of running backs—perhaps single most potential-soaked positional unit in the entire NFL—to pull out the victories. With LeGarrette Blount leading the way, they’ve found immense success. Last week the group helped to eliminate the Colts by rushing for over 200 yards and six TDs.

Denver fans know all too well that the Broncos defensive units are, well, terrible. They’re ranked 27th against the pass and 25th against the run. If the Pats can establish their ground game early, Brady won’t have much difficulty keeping the team off balance and picking them apart.

On the other side of the field, the Patriots defense is ranked 3rd against the run, although Knowshon Moreno didn’t seem to struggle too much last time—gouging the Pats for 224 yards and a touchdown earlier this year in Foxboro. But just like their counterparts out West, the Patriots defense will be tested the most by the opposing quarterback.

For a unit ranked just 15th against the pass, the Patriots secondary sure does seem to put together some nice performances when it matters most. They’ll be asked to do it for 60 minutes on Sunday, when one mistake against Manning could mean the difference between an 80-yard touchdown or a 2-yard gain on a smoke screen to Demaryius Thomas.

For the Broncos, Chris Harris, their stud nickel cornerback, has been lost for the season, and he’ll be joining Von Miller on the sideline. Injuries are mounting for both teams and getting production from guys who weren’t supposed to be starting will go a long way in determining who will win this one. I’m taking the Broncos simply because the offense is good enough to win a game without any significant contributions from the defense, and because Peyton is so F****** tired of losing to Brady and Belichick.

Will Knowshon and the Broncos cry tears of joy or sadness this weekend?

In the NFC Championship game, you have what should be considered the most exciting rivalry in the NFL right now in the Seahawks and Niners. There will no shortage of intensity (and if I know Richard Sherman, shit-talking) when these two teams line up to face off for the third time this season.

Fans of either franchise will be quick to dismiss any proposed similarities between the clubs because of the animosity felt, but these teams are remarkably similar: both teams’ head coaches were successful in the PAC-10/12 before jumping to the NFL. Both offenses are powered by mobile quarterbacks (who weren’t first round picks) and strong running backs. Both defenses rank in the top-seven in terms of defense against the pass, defense against the run and total defense.

Plain and simple, this game will be decided by the play of Colin Kaepernick and the 49ers receiving corps against Richard Sherman and Legion of Boom. The Seahawks led the league in interceptions and finished eighth in sacks. Kaepernick finished with respectable numbers this year, but the consensus about his play was that he regressed. If the Seahawks can keep Michael Crabtree, Anquan Boldin and Vernon Davis under wraps, the talented front seven is athletic enough to keep Kaepernick in check.

Of course, neutralizing those guys is no small order, and with starting CB Brandon Browner suspended indefinitely for a failed drug test – one of many players in Seattle to be suspended since Pete Carroll took over the reigns as coach – Seattle will look to Walter Thurmond III and Byron Maxwell for contributions. Fortunately for Seahawks fans, they’ve shown both promise and poise in the action they’ve seen this year.

For my money, I don’t think Kaepernick or Gore will play well enough to win this one for the Niners, and I think Seattle will play a very well-rounded and thoroughly dominating game to win going away. 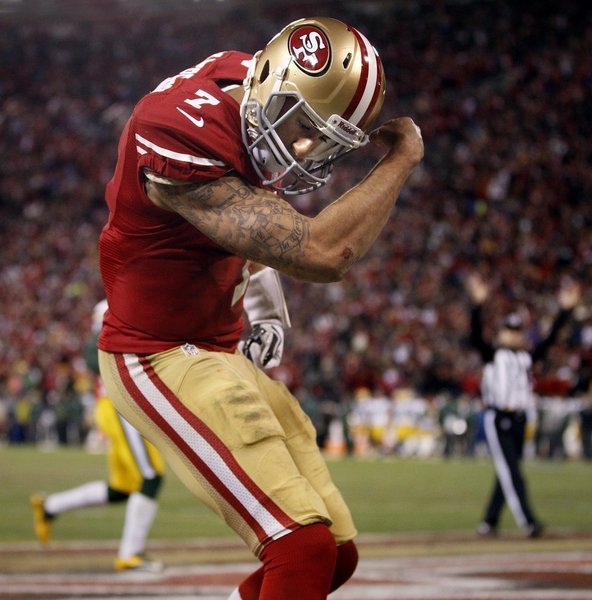 This one is gonna be decided by the play of Colin Kaepernick.

Enjoy what promises to be an action-filled Championship Sunday!

Oliver Ristow is a sportswriter for Writtalin. He played football and hockey at Pacific Lutheran University before graduating from Colorado State University. He is an avid outdoorsman and occasionally, he brushes his teeth in the shower. You can email Oliver at: oliverr@writtalin.com