Posted On January 17, 2014 By Ascher Robbins In Gambling Life, Sports

Time for the NFL’S final four. Championship Sunday. And shockingly, the four teams thought to be the best back in August are still standing. Broncos-Patriots, and Seahawks-Niners. Let’s do this.

I sucked majorly last week going 0-3-1, but hey, nobody’s perfect. All of the games except for the smackdown the Patriots laid on the Colts could have easily gone the other way, as far as the spread is concerned, SO I’M OKAY WITH IT AND DON’T MAKE FUN OF ME.

As always, these are not predictions on who will WIN the games this weekend, but rather who will cover the spread.

Here are my against the spread picks for the NFL AFC and NFC Championship Games. HOME TEAM is in CAPS, and lines reflect Friday, January 17th.

Yeah, I know. I’m a Broncos fan and I WANT this to be true. But, when in doubt, stick with what works. I picked the Broncos to cover against the Chargers last week, and even if they didn’t (which was bullshit, freaking Novak is 4-6 on onside kicks!??), they got the victory, so I gotta roll the dice here again. Superstitions aside, I am pretty confident (knocking on wood feverishly) that the Broncos will win this game. Here’s why…

First off, Tom Brady is 5-6 in his career against the Denver Broncos (regular and postseason) – THE ONLY TEAM HE HAS A CAREER LOSING RECORD AGAINST. Even more damning, that 4-5 record against Manning’s Bunch is worse IN Denver, where Brady has gone 2-3 in the regular season, and a very memorable 0-1 in the playoffs. Furthermore, the Patriots franchise is just 9-18 all time in the Mile High City, and the Great Hoodie is only 7-10. Secondly, the Broncos and Patriots would be 1-1 against each other this year, each result in blowout fashion, if the games were 30 minutes long. The Broncos won the first half of the matchup 24-0, while in the second half, the Patriots won 34-7. A tale of two halves, to be certain. But that game was played IN New England. If the Broncos jump out to a quick lead in Denver, I don’t see them relinquishing it. Also, a key for the Patriots in that comeback effort was a certain somebody who will be spending this game like his coach – in a hoodie. Gronk was instrumental in the previous game, snagging 7 balls for 90 yards and a TD. The Patriots will miss his production. Lastly, the Broncos can certainly be thrown on, with the sorry excuse for a secondary they’ve been trotting out; a secondary that will now be without Chris Harris, too. Yes, Quentin Jammer is absolutely horrendous, as Phil Rivers showed in the 4th quarter of last Sunday’s game, but that might not be as important as you’d think because, well, the Patriots have been winning by RUNNING THE FOOTBALL. And, for all the Broncos’ struggles on defense, the run D has been pretty decent – they’ve only allowed ONE 100 yard rusher this year (Ryan Mathews, of all people). I don’t see LeGarrette Blount and the rest of the Role Player Committee being the factor they were against Indy.

So while those stats give me hope for a Broncos victory, these stats are why I chose the cover…Denver is 11-4 ATS in its last 15 games when playing at home against New England. New England is 3-12 SU in its last 15 games when playing on the road against Denver. The Patriots are 1-5 ATS in their last 6 games on the road. Those trends seem to point to a six or seven point Bronco victory to me. Plus, are you REALLY taking a team whose best two offensive weapons NOT named Brady are a former college QB with 69 career receptions before this season, and a guy who has problems with sportsmanship, drugs, and overeating to beat PEYTON F***ING MANNING at home with everything to prove? I am not. 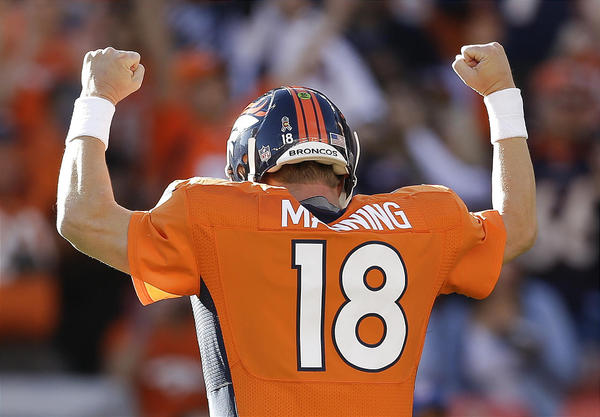 You heard it here: Peyton and the Broncos are heading to New Jersey.

This one is a little easier for me, even if everyone in America is LOVING San Francisco right now. Yes, the Niners have played incredibly well in the second half of the season, and that includes a victory over these very Seahawks just over a month ago. Colin Kaepernick has been playing better of late, and, not coincidentally, he has Michael Crabtree back as a reliable complement to Anquan Boldin and Vernon Davis. San Francisco has NOT LOST A GAME since November 17th, too. Very impressive.

On the other hand, the Seahawks have lost twice since December: to the Niners, as mentioned, and then, there was that shocking home loss to Arizona. Despite what the media constantly hypes up to the contrary, the Seahawks are NOT invincible at Qwest Field…but they are pretty close. Nobody has been victimized by Seattle’s homefield advantage lately than the 49ers and Colin Kaepernick. In the Niners’ last two trips to Seattle, they have been outscored 71-16, and Kaepernick has managed just one TD pass to 4 interceptions. In both recent meetings in Washington state, Jim Harbaugh’s team was absolutely CRUSHED, never getting close to competing in either game. The Niners’ recent history in Seattle makes me think that, despite Russell Wilson’s mediocre play of late, the Seahawks will beat the 49ers.

While I believe Seattle will WIN the game, the spread is another matter. However, I think the Seahawks will win this one comfortably, just as they have the last two times they played San Francisco at home. I’m basing this off of several trends. First, and unsurprisingly, San Francisco is 0-5 ATS in its last 5 games when playing on the road against Seattle, and perhaps more importantly, the Niners are also 0-5 ATS in their last 5 games when playing Seattle in general. Not a good omen for the 49ers. It doesn’t help that the ‘Hawks are also an impressive 15-5 ATS in their last 20 home games, either. I see nothing here to indicate that the Seahawks won’t get the win AND the cover.

Richard Sherman and the Seattle D are kryptonite to Colin Kaepernick.

Buckle up for a wild ride. Next stop: THE SUPER BOWL!