Posted On February 21, 2014 By Renée Rapin In Buzzworthy, The Scene

So, I didn’t even know you could get jailed for something like this. A woman named Kayla Michelle Finley from South Carolina spent a night in jail after she was caught for failing to return a movie she rented nine years ago.

You bet she’s SO pissed

Apparently she originally went to the jail to report an unspecified crime, but instead, was charged herself! And what was the movie she chose to rent for 9 years? The Jennifer Lopez rom-com, Monster-in-Law. I mean, I enjoyed that movie. But I’m not sure it was worth going to jail over…

The movie was rented from a now out-of business Dalton Video Store. The owner had taken the issue to court nine years ago and a warrant was issued for Finley. The case went cold until now! Finley explains, “It’s obvious that Pickens County has nothing better to do. I fully intend on fighting this, it’s ridiculous I had this happen to me.”

But here’s my favorite part of the whole incident. The movie she stole was a VHS cassette. WOW. I didn’t know people still flip out over VHS tapes. Finley is charged with a misdemeanor–petty larceny–and the ridiculous crime of failing to return a video or cassette. I’m shocked that’s even a thing. So guys, if you still have a Blockbuster VHS…you better leave the country, because they’re after you!

I just love when ironic news comes out! Jamie Coots, a snake-handling pastor,  died this week after being bitten by a rattlesnake. Coots refused to have medical treatment for the bite, saying he needed snakes for religious reasons. He claimed his religious conviction is based on a passage in the Bible that reads, “They shall take up serpents; and if they drink any deadly thing, it shall not hurt them; they shall lay hands on the sick, and they shall recover.” I really wish people would stop taking the Bible so seriously… He totally belongs in Slytherin. 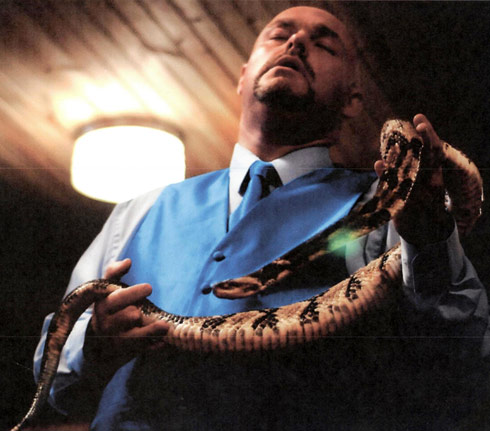 A neighborhood in Phoenix called Maryvale is currently being terrorized by stray chihuahuas. According to locals, the dogs are running wild, barking like crazy, and pooping all over the place. Also, they’ve been seen harassing children!

These stray chihuahuas are apparently recruiting other stray dogs for their pack, specifically bigger dogs. Oh man. While locals are hiding in their homes, animal shelters are doing what they can to get the situation under control. I bet they are just out on a rampage wanting Taco Bell. If someone were to treat them to some 89 cent tacos, they’d go away.

You better do what he says.

Man shoots at snowplow driver for driving too slow

I know the weather in the Midwest is absolutely awful these days. It sounds horrible and not worth trying to live in. So I guess I can understand that people are a little fed up, getting stir crazy and wanting to get their anger out. But that’s certainly not a good reason to do what this Michigan man did. Apparently, a snow plow driver was clearing snow from his apartment drive way when this man asked him to go faster with his gun drawn. He then started firing shots.

If I were the driver I would have used this move.

Luckily police showed up and arrested the man. However, the snow plow driver continued to move snow after the incident. Good job man! As for the rest of you people buried in snow to the east, chill out. Or join me in California and have nice weather but no water. Decisions, decisions…

How I imagine the crazy gun man looked…but colder.