So the World Cup is upon us and I’m sure you all took bets on who would win the first game. You might have used some weird superstitious tradition to figure it out. Or maybe you wanted to be like Jimmy Fallon and use puppies.

Or,  you could have just talked to me and saved yourself the trouble because I knew who was going to win way ahead of you. How did know Brazil was going to win? Because a psychic turtle told me. Yes folks, I know it’s incredible and hard to believe but Brazil has its very own turtle to predict the winners of the 2014 World Cup games. His name is Cabecao or Big Head and based on his food choices a few days ago, he predicted that Brazil will beat Croatia in the opening game. I guess we’ll see what he predicts for the rest of the games. Hopefully his wins do no go straight to his head…ba dum tisss.

Unfortunately for the citizens of Helsinki an elk decided to run a muck right in the middle of rush hour. The animal spent the evening roaming the streets, running in front of cars, and dashing in and out of bushes. Luckily there were no accidents reported. Apparently this sort of thing happens often as Finland has developed their own term for a road accident involving an elk called a hirvikolari. Must be a lot of crazy elks trying to play with squirrels and dodge cars. 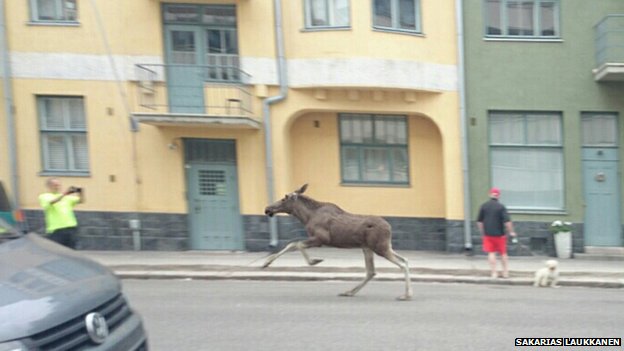 The police spent the night chasing the “erratically-behaved” beast and had no choice but to shoot the animal. The local paper reports, “They had been hoping to spare the animal by directing him towards the sea so it could swim away.” Wait, elk can swim? I know I’ve seen some documentaries with moose crossing rivers but you really think it would just wander into the ocean and swim away? Where would it go? I’m not so sure about that theory. He’s totally headed for the Bahamas

But it doesn’t seem like the folks of Helsinki were too upset about the death of the elk. One woman explained to reporters, “I’ve just told my neighbor – make sure your freezer is empty as there is so much fresh meat to offer.” Oh dear.

In honor of National Jerky Day (June 12) the employees at Link’s Beef Jerky decided to build a replica of Mount Rushmore, made entirely of jerky. They’ve dubbed the name “Meat Rushmore” for the 13ft sculpture. 1,600 pounds of beef went into the making of this piece which is about five miles of jerky if you were to lay each stick end to end. Holy jerky. More than 20 staff have put in 1,400 hours of work to recreate the presidents. I wonder if those counted as overtime hours? Either that, or these guys do not have enough work to do…Apparently, meat sculpting is a new thing and the art director is concerned as he does not know what to expect. Well I can tell you one thing, expect anyone and anything to try a piece! The sculpture was on display in New York’s Columbus Circle from 8am to 6pm. It is now being shipped back to the Jack Link’s headquarters in Wisconsin. Men Were Built to be Punched in the Face

So this not only is a WTF article but pretty interesting and educational. See, my articles are useful for you to read!

This week, scientists have created a new theory involving the evolution of our male ancestors. To sum it up, they explain that male humans evolved stronger and more equipped bones in their faces to handle physical abuse. They believe the bones most commonly broken during human punches to the face gained the most strength during “hominin” evolution. The theory explains violence drove most of the evolution during this time as our ancestors fought over food and territory. These bones also show quite a difference between males and females. Professor David Carrier explains, “In humans and in great apes in general…it’s males that are most likely to get into fights, and it’s also males that are most likely to get injured.” The bones in your face are very vulnerable to injuries leading scientists to believe this was the best location to attack your opponent. The early hominins were the first primates to evolve a hand shape capable of making a fist and throwing a punch. The areas most commonly affected by a punch (jaw, cheek, eye, nose, etc) also formed better protection mechanisms during evolution. 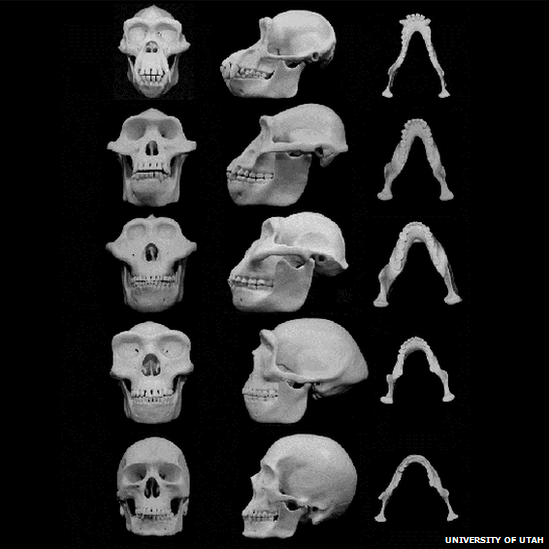 So there you have it. Ladies, next time your man is being a dick just punch him in the face. When he complains tell him to get over it, his face was made for it. You could do way worse things.