Posted On January 23, 2014 By Renée Rapin In Buzzworthy, The Scene

Well hello Writtalin readers! Before I begin my first post I’d like to tell you a little about what you can expect from me on this site. There’s nothing that I enjoy more than reveling in the whatiswrongwithpeople news. It’s a big, big world out there and some people are very….unique. So, I’ve decided to take on the task of bringing you the outrageous, strange, good-for-you news that you might miss. Of course I’ll give my opinions, which hopefully you’ll find entertaining. If not, at least the story should make you chuckle. I hope. So here goes…

Now for some news from the past week that will restore (or decrease) your faith in humanity…here is This Week in WTF!

PORCUPINE THRILLS FOR QUILLS (see what I did there?)

Guys. You know the saying it’s raining cats and dogs? Well, what if it rained porcupines? Yeah, pajama and Netflix party inside for days. Well, a woman from Brazil actually had a porcupine fall on her head. Apparently, Sandra Nabucco was out for a walk when all of a sudden she felt something spiky fall on her head…something she described as “frightening and very painful.” 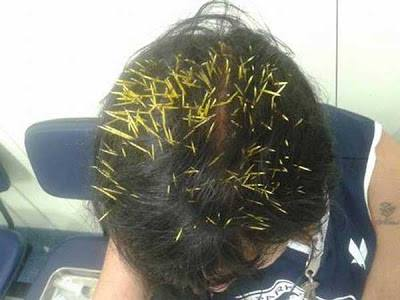 Doctors were able to remove the spikes and Sandra is taking antibiotics to recover. However, I find it interesting that her main concern was for the porcupine: “I saved its life…he broke his fall on my head,” Sandra said. I’m sorry, but I’d be a little more pissed if a porcupine decided to go base jumping from a lamp post onto my head. YOU CAN BREAK YOUR FALL ON THE CEMENT, BRO.

Are you recent graduates still struggling to find that dream job? Do you want the job of a lifetime? Did you, like me, grow up watching Jeff Corwin and Crocodile Dundee and think to yourself, I can be the next Steve Irwin!?

Well look no further! Florida is hiring croc handlers! Oh, but here’s the catch, “you have to be willing to handle live crocodiles.” Wait…really? But that’s okay, experience is not required. So come on, jump in your Subaru and head off to the bayou for some full time crocodile wrestling! No word yet if benefits are included, but let’s hope their insurance policy is top rate.

See? EASY. Nothing can possibly go wrong. No experience necessary.

Here’s a real facepalm. Anthony was wanted by the police. The police posted a photo of him on their wanted bulletin. So what does Anthony do? He makes a Facebook status referencing the bulletin and poking fun at how the police can’t catch him.

So, the police message him in disguise as an attractive female, get him to agree to meet up… and BAM. The sucker gets caught. Come on people, how have we not learned that everyone is on Facebook and your profile is public?  Also, hey there NSA! Take home lesson of the day, don’t mess with the po-po…and catfishing is getting really real.

Nev Schulman would be disappointed, Anthony. Getting catfished by the cops is WEAK.

Now this story seems to have exploded in the past few days but in case some of you missed it, here it is. It truly is a gem. It seems this snowstorm business on the East Coast is getting out of control. People are unable to leave their houses for work, school, shopping and…Taco Bell. I totally get where this person is coming from. He/she is just craving the wonderful-yet-awfulness that is T-Bell. SOMEONE GET THIS PERSON SOME TACOS. I wish I had a snowmobile to pick them up. In the Craigslist post, they are offering to pay for a meal that I will regret later, and to play video games with me. Hopefully someone in Baltimore helped them out because hey, “it’s snowing like a b**** outside.”  Together we can make it through the snow…and Taco Bell cravings!

So there you have it: all the IMPORTANT things that happened this week. Check back next week for more of the things that make us glad to be alive.