Posted On February 5, 2014 By Anthony Kozlowski In Artist Interviews, Music

Writtalin Artist Insider: An Evening with Parade of Lights

In the world of professional sports, a dislocated knee could mean the end of a career.  For a certain Los Angeles-based electropop quartet, however, it was only the beginning.  “It’s been a trip,” muses frontman Ryan Daly.  “We never thought a year ago that things would have blown up so quickly.”

The Slidebar in downtown Fullerton is packed, but somehow I’m able to hear him over the roar.  The KROQ Locals Only Show is already in full-swing, but we still have a few solid hours before Parade of Lights takes the stage.  That’s the beauty of a headlining show.

Ryan explains that before they were known as Parade of Lights, he and drummer Anthony Improgo, along with bassist Randy Shulte, fronted the short-lived band Polus.  “We bonded a lot over Failure,” explains Anthony.  “We were all huge fans of everything Ken Andrews and Greg were doing.  That was a huge inspiration in getting Polus off the ground.”

That all came to a screeching halt though during a sold out show with Built to Spill at The Troubadour in Los Angeles.  During the first song of the night, Ryan twisted his knee and went down hard, dislocating it and putting an abrupt end to a promising performance.  “We did manage to sell a lot of CDs that night,” adds Anthony, through a sly grin.

Apart from that silver lining, the band found itself on hard times.  Polus went on an extended hiatus during which the members split off to pursue small touring gigs – basically anything to keep the rent paid and the food on the table.  “Scraping the bottom can only go on for so long,” Improgo continues,  “Eventually we realized that we were better off together.”

So in 2010, the gang reunited under the Parade of Lights name.  They played for a couple years, releasing the well-received EP “Born to Live, Born to Love,” and then met keyboardist Michelle Ashley, who now sits across from me.  “Ever since we met her we’ve been on unstoppable unit,” he finishes.

Indeed, that seems to be the case.  Since they signed a deal with Astralwerks Records last August, Parade of Lights has been on the fast track to stardom.  Their new single “We’re the Kids” has gotten serious notice from alternative radio, they’ve opened for the likes of Panic! at the Disco and Imagine Dragons…and we’ve even featured them on our own Artists to Watch List for 2014.

Just what is it that makes a success story like this possible?  Luckily for me, I got to ask the band in person. 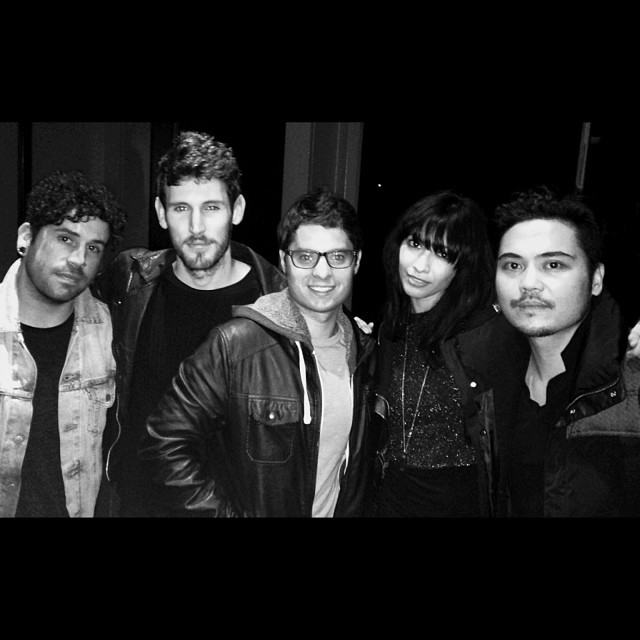 Anthony Kozlowski (center) got to sit down with Parade of Lights last week.

How has signing with Astralwerks Records affected you as a band?

Ryan: More than anything, we’ve always been very DIY, handling everything from music production all the way down to our website and graphic design (Anthony’s a graphic designer).  Basically we like to be in full control of our image.  It’s really nice to be on board with someone like Astralwerks because they understand that and cater to bands who want to maintain their autonomy, but can also provide support and flex a little muscle where it’s needed.  They’ve been nothing but awesome to us so far.

You’ve played shows with such artists as Imagine Dragons, the Neighbourhood and Thirty Seconds to Mars.  Have there been any standout moments performing alongside any of these big names?

Michelle: It was pretty crazy playing the Imagine Dragons show back in December.  We were in our hometown, it was pretty much sold out, and it was unbelievable playing alongside another band from Vegas that had achieved the kind of caliber that they have.

Anthony: Opening for Fitz & the Tantrums was also pretty cool because that was Michelle’s first show with us.  We played the Wiltern Theater in LA in front of three thousand people, sold out.  Pretty sweet for a first show, right?

Michelle: I think that show also helped me solidify what I wanted to do with my life.  It was such a great experience and the performance was wild and energetic.  Everything seemed to click right away.  That’s when I knew for sure that I wanted to keep playing with these guys.

Is there anyone you haven’t performed with yet that you want to?

Ryan: M83 would be awesome for sure.

Michelle: We also just found out that we’re going to be playing with the 1975 at SXSW this year.  I’m personally stoked for that one.

Ryan: Oh, and U2.  If we booked a gig with them, that would be the dream right there.  I would sob.

Writtalin named you as one of ten artists to watch in 2014.  What can we expect from you this year?

Ryan: It’s definitely going to be a packed year for us. We just finished recording an EP, which will be released in March.  Leading up to that, we are touring with Royal Teeth in February as well as playing SXSW and doing another tour with X Ambassadors in April.  So it’ll be shows, shows, shows for us going into 2014, trying to get out everywhere we can.

We also plan to get together at some point and pen some stuff for our first full-length album.  So get excited about that.

What can you tell us about the upcoming Golden EP?

Ryan: With this one, we really tried to establish our sound so it’s less a collection of songs and more a statement of who we are as a band.  It took us a long time to really hone in on what we wanted to sound like and to just let go and do what we wanted to do without any preconceived notion of fitting into a specific genre or niche.  After all this time, it finally sounds like us and we’re really excited to put it out there and see what people think.

If you were to describe the sound of Parade of Lights in terms of a movie, what would it be?

Ryan: I think that’s rad. But like a happier version.

Ryan: Definitely.  The sun comes out at the end and Harrison Ford has a killer tan.  It also turns out that Replicants are actual people with hearts and souls at the end of the movie.

Anthony: That’s easy because I haven’t had coffee in about five months and I’m about to ditch this interview and get some next door.  I’m a Grande Awake Tea Latte, please.

Michelle: I’m a wuss.  I get a Tall White Chocolate Mocha.

Ryan: Five shots of Espresso in a short cup.

Randy: I go for the Quad Espresso or just a straight black coffee.

Keep your ears and eyes open for Parade of Lights, as they’re going to make some figurative and literal noise in the next year. And DEFINITELY make sure to preorder Parade of Lights’ Golden EP right here.