Posted On February 11, 2014 By Cat Hausler In Artist Interviews, Music

The temperature is sub-zero as I head to the Four Seasons in Denver for my interview with Jordy van Egmond.  It’s 11:15 p.m., and Jordy is supposed to start his set at Beta Nightclub at 12:30. Still, he has agreed to chat with me, despite the hour and freezing Colorado weather.

Jordy is only 21 years old, but he has achieved things DJs double his age can only dream of- he made his debut at Ultra last year when Hardwell invited him on stage to play their new song “Never Say Goodbye” (this song would later go on to become one of the biggest dance anthems of 2013), he entered the 2013 DJ Magazine Top 100 list at No. 30 (the youngest entry in history), he’s played major festivals like EDC Las Vegas, Electric Zoo and Tomorrowworld, and has his own show on SiriusXM radio called “Daftastic.”

For so many accomplishments, Jordy still comes across as a normal 20-something; humble when he talks about his successes. When I sit down to speak with him, he’s dressed in a simple black t-shirt and jeans. Upon first look, one might not guess that 21-year-old Jordy van Egmond is in fact EDM sensation Dyro.

I had the chance to sit down with the dynamic DJ last Thursday. Here’s what he had to say. 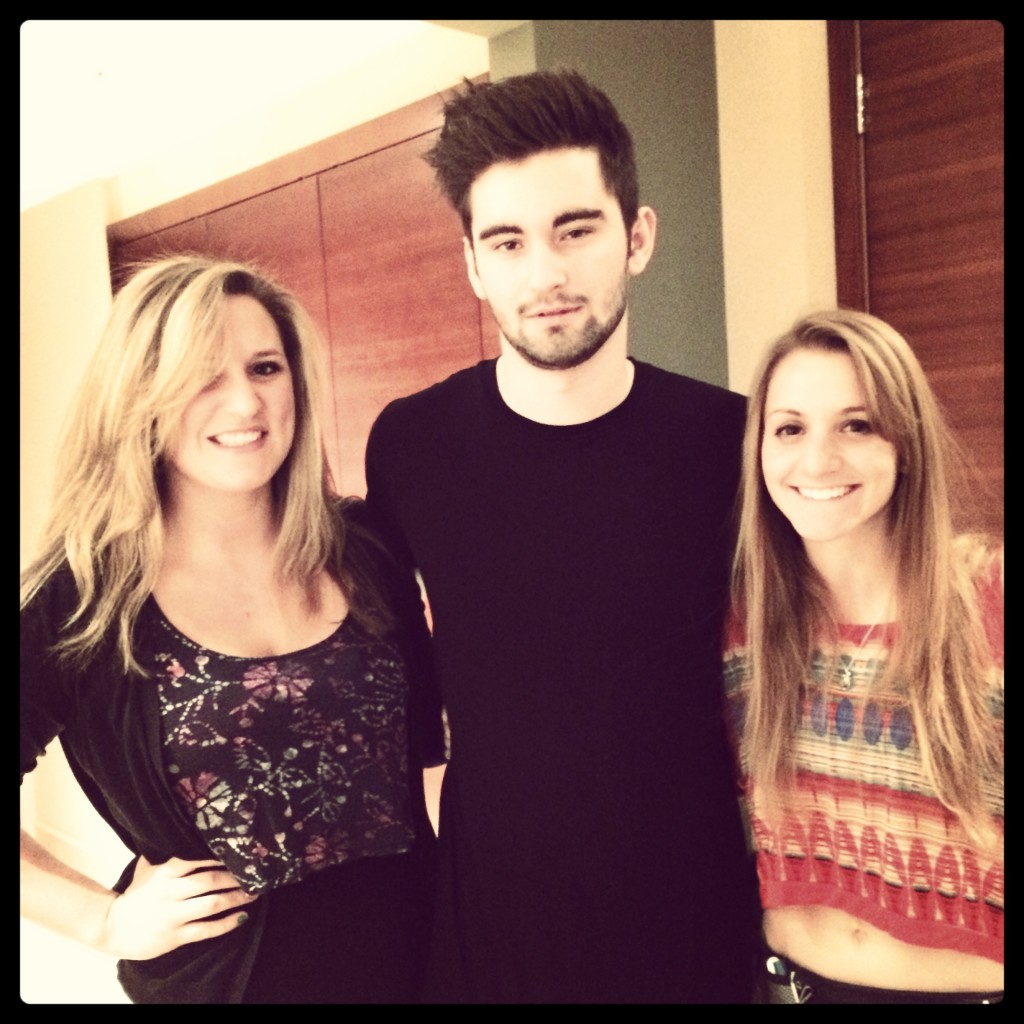 Our own Cat Hausler (left) caught up with Dyro last Thursday.

Your real name is Jordy van Egmond. Where did the name “Dyro” come from?

Dyro: When I started making music, I had to think about a name and I wanted it to be something that had to do with my own name, not just some random name. I made a play on my own name, Jordy. It’s just the letters rearranged without the ‘J.’

Would you say that’s a persona? Are Jordy and Dyro different people, or are they the same?

Dyro: They’re kind of different people, yeah. What the crowd sees and what they think of me is totally different than what I really am. But I’d like to show people more personality and what’s behind ‘Dyro.’ So that’s what we’re trying to do right now with the ‘Dyro Diaries’- show some more personality.

How would you describe your “sound?”

Dyro: It’s definitely electro. What I always say is, one of the most important ingredients in my songs is energy. So when I make music, that’s the key thing that I look for. It’s kind of hard to explain – but it’s just the music I like to make – it can be something different every time.

Where do you primarily get inspiration for your music?

Dyro: Sometimes what I do, if I hear a melody somewhere or something that I like, is I hum it into my phone. Inspiration can come from everyday things – a commercial, or other people’s music…but definitely not only EDM. I listen to all sorts of music.

Was there a specific moment when you decided that DJing was what you wanted to do?

Dyro: Not really. I just grew into it. I love making music, so I started that when I was 18. I started out by DJing minor clubs in my hometown, which were really just small bars. Then I was just out of high school when I got discovered by Hardwell, and that’s when I started touring.

Currently, you’re touring the U.S., then you head to Australia at the end of this month. Talk to me about the tour you’re on right now.

Dyro: It’s called the ‘Black Smoke Tour.’ I recently released a song at the end of January called ‘Black Smoke’ and we added a tour onto that to promote the song. It’s going very well so far.

After Australia, you travel back to this part of the world to play Ultra, and then embark on the Revealed North America Bus Tour with Hardwell and Dannic. First of all, how are you feeling about playing Ultra solo for the first time?

Dyro: It’s kinda funny – when I first started out, Hardwell and his team brought me to Miami. I hadn’t signed anything, they just brought me so I could see what Ultra was all about. Back then, I had very little knowledge of the EDM world. I was really in my own bubble. So, I didn’t really know about Ultra 3 or 4 years ago. But when I first saw it, it was definitely one of my goals to play it. So it feels really good to realize a goal like that.

You, Hardwell, and Dannic did the Revealed Recordings Canadian Bus Tour last year. What is it like touring with two of your closest friends?

It’s a good thing and a bad thing. The three of us are kind of a destructive combination. It’s a complete party. It’s just friends on tour – like a school trip, a field trip with your friends – that’s what it feels like. The best thing is that you’re on a tour bus, you don’t have to fly or anything. You just play your show, get on the bus, and go on to the next show. 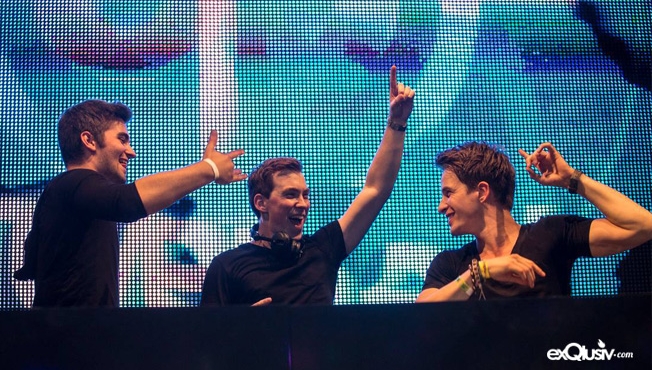 Dyro, Hardwell, and Dannic performing together

What do you think will be different about the Revealed North America Bus Tour this year?

Dyro: I think the only difference is that the shows have become bigger. Me, Dannic and Hardwell- all of our careers have grown exponentially, so we’re doing really really big shows this time. It’s recognition of our growth.

There are a number of DJs around your age who are really making a name for themselves (Alesso, Porter Robinson, Zedd, etc), but there’s also a group of younger producers who are extremely successful right now (Madeon, Martin Garrix, Danny Avila, etc). How do you think this new generation of DJs is changing EDM?

Dyro: They’re bringing a new sound. DJs are just getting younger and younger. It’s getting easier for people to make music, so kids are discovering it earlier, I think. I don’t think there’s anything bad about it. It’s cool to see a fresh perspective on what we’re doing in EDM. But it’s funny that these guys aren’t old enough to get into a club when they’re making club music.

The hot topic in EDM right now is whether or not it’s turning too “mainstream.” How do you feel about this?

Dyro: It’s a good thing and a bad thing. Because EDM has become more popular, there’s more of a crowd wanting us to play at shows, there’s more demand I think.

Are you of the opinion that EDM is getting too mainstream?

Dyro: No, I don’t think so. It is getting more mainstream, but not too mainstream. I mean, if you turn on the radio in the U.S., it’s not only EDM.

If it were all over the radio, it’d probably make my life better.

Dyro: But if it was only EDM on the radio, it’d be over-kill. If people heard it on the radio all the time, why would they go to shows to experience the music?

2013 was a huge year for you- the release of “Never Say Goodbye,” entering the DJ Mag Top 100 list at 30, and so forth. What can the world expect from you this year?

Dyro: A lot of things. I’m working on a lot of new music. I’m starting a collaboration with Hardwell for his new album which is going to be really cool. I’m going to South America for the first time. The Australian tour- after that there’s another tour before I go to Miami. There’s just a lot of stuff.

If 2013 was a record year for Dyro, I can’t wait to see and hear what 2014 has in store for the DJ. If you’re unfamiliar with Dyro, be sure to check out his biggest hit, “Never Say Goodbye.” And don’t miss his episodes of “Daftastic” on SoundCloud. For now, here is his newest club favorite, “Black Smoke”: