Posted On February 4, 2014 By Ascher Robbins In Music, Music Reviews

I truly believe that the hallmark of any great artist, of any great musical outfit, is the ability to evolve musically, to grow personally, and to have every new album serve as a showcase for that latest great step forward. There is little more impressive than progress. Against Me!‘s latest album, the deeply personal Transgender Dysphoria Blues, not only represents a bold new step for the band and frontwoman Laura Jane Grace – it represents a colossal step forward for the LGBT society, and hell, the American public at large. If Transgender Dysphoria Blues can be summed up in one word, it has to be progress. Progress for Grace in her personal life, progress for Against Me! musically, and progress for us as a society. 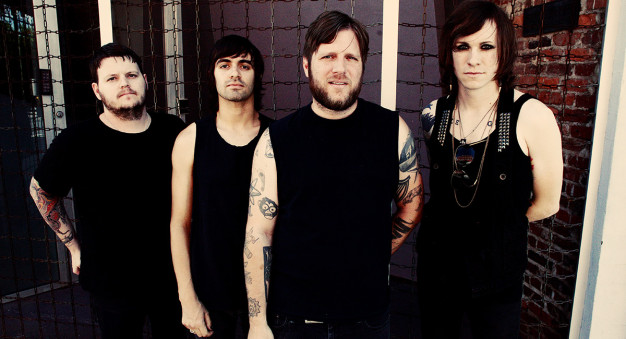 Against Me! has been one of the most influential punk rock bands of the 21st Century. Their latest album, Transgender Dysphoria Blues, was released last week.

If you don’t know the backstory here, I’ll sum it up briefly. Until 2012, Against Me!’s founder and the outfit’s one consistent member throughout its existence, Laura Jane Grace, was known as Tom Gabel. In May of that year, Grace made the brave decision to stop living as Tom, and start living as Laura. Grace had always known she was transsexual, but in a society that has just recently begun to accept homosexuals as human, living entities, for a public figure to come out as trans was virtually unprecedented. Nonetheless, Grace decided it was time to stop living the lie that was making her miserable, alcohol-dependent, and occasionally suicidal – she would live the rest of her life as the woman she knew she was all along. Of course, that decision led to a veritable shitstorm of both public and media interest, for better and for worse. Grace never intended to be the great white hope for transsexuals, she was simply all-too fucking tired of pretending to be what she was not: a man. But nonetheless, Grace has BECOME that symbol for a minority that is greatly underrepresented in popular culture, whether fair or not. As Grace stated in a recent interview with Grantland, it’s hard to be a the spokeswoman for an entire population when she still has so much of her own life to figure out. And, without a doubt, Transgender Dysphoria Blues is the product of that confusion, of that pent-up frustration, and of the bittersweet relief of being freed of a life lived in hiding, and in return, faced with a culture that simply doesn’t understand – can’t understand – her lifestyle. 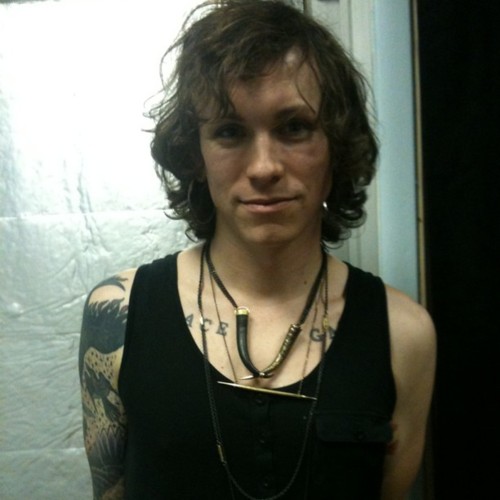 Laura Jane Grace’s decision to come out as transgender was a turning point – for her band and American society.

Against Me! has never been a band to avoid touching on social issues or tackling sensitive subject matter. The argument could easily be made that, in fact, Grace’s group has been the most true to punk rock ethics of any band to find any popular recognition in this century. Actually, this isn’t even the first time Grace’s lyrics have touched on transgender dysphoria; on the band’s 2007 album New Wave, closing track “The Ocean” features the fairly-telling lyrics “If I could have chosen / I would’ve been born a woman. / My mother once told me / She would have named me Laura.” Of course, in retrospect, it’s easy to think that Against Me!’s listeners were all oblivious for missing the obvious message, but hell, in punk rock, lyrics are often intended to be avant garde and nonconformist (is there anything more punk rock that a tatted-up, screaming dude stating his desire to be female?). But Grace was always pushing the boundaries of her secret, without actually stepping out of the closet. As she stated in the interview with Grantland, one huge motivating factor for her decision to start living as a female publicly was getting outed, albeit sarcastically, by Brendan Kelly of The Lawrence Arms during a 2010 interview. The signs had always been there, and indubitably, much of Against Me!’s lyrical content throughout the band’s existence has come from the inner-turmoil Grace has had to deal with living in a world that she wasn’t sure would accept her true self.

And if past Against Me! albums’ content is about the struggle of keeping that secret, of living a lie, Transgender Dysphoria Blues is about coming clean and adjusting to a now-public life. While the lyrical content on the album is novel, to be sure, the record also shows a musical evolution of sorts for the band. Transgender Dysphoria Blues has the strange combination of pairing some of the most depressing, personal lyrics Grace has ever penned with some of the catchiest, most radio-friendly music Against Me! has ever composed. Without a doubt, this is the softest album Against Me! has ever released, and I don’t mean that in a bad way. Much of the outfit’s early work was characterized by a raw, visceral aura that permeated every aspect of the group’s music; and while angsty, screamed vocals and unfettered guitar feedback are fitting for the rage of a confused young woman, the way Grace’s vocals are set to flawlessly produced, musically-appealing tracks on Transgender Dysphoria Blues makes the actual content of the lyrics stand out more than the rage behind them – something which I’m sure was intended on a record as unrelentingly personal as this. 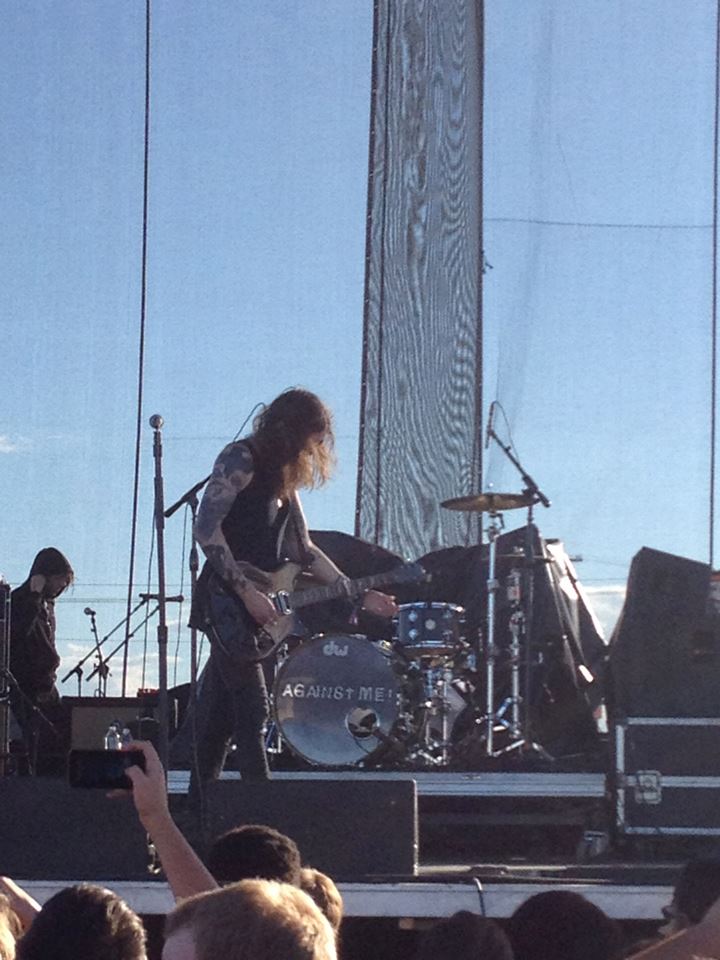 Laura Jane Grace performing with Against Me! at Riot Fest in Denver, 2013.

Just because Transgender Dysphoria Blues is a musically softer side of Against Me! does not mean that this album is a study in subtlety by any means. Longtime fans who held some absurd notion that Grace’s new female identity would lead the band to be more Paramore than Pennywise were proven wrong within seconds. The album is still incredibly NC-17, and I’m sure many parents of punk-rocker teens have already thrown a fit over two over their child listening to an album with songs titled “FUCKMYLIFE666” and “Osama bin Laden as the Crucified Christ.” No, Against Me! has never been much for subtlety, and it’s nothing new on that front. The way Grace addresses her plight as a transgender woman is straightforward and no-holds-barred as well, as the album’s opener – and titular track – features the pre-chorus of “You want them to see you / Like they see every other girl. / They just see a faggot. / They’ll hold their breath not to catch the sick.” You can hear Grace’s years of frustration on nearly every track, as she struggles to make peace with a world in which too many people just don’t accept lifestyles outside of traditional heteronormativity.

And, at the end of the day, what’s more punk rock than accepting that you’re different, and telling everyone else to fucking deal with it? Transgender Dysphoria Blues is not Grace’s endgame, and certainly not the apex of her transformation into an open, genuine transsexual woman. It is merely the first step in moving herself and her fellow LGBT human beings out of hiding and into the arms of a public that, for the first time in American history, can accept, even if it can’t fully understand. Grace will always have to deal with people who just don’t GET IT – a recent conversation on her Twitter account shows how far society still has to come to truly UNDERSTAND Grace and the transgender culture as a whole. But, without a doubt, Transgender Dysphoria Blues is a high-heeled step in the right direction.

Oh yeah, and the album fucking rocks. Take a listen below.