Posted On January 20, 2014 By Ascher Robbins In Movies

What’s in a Title? A Review of Lone Survivor

I don’t go to the movies much these days, as with my new Apple TV, I usually use Netflix, or, for recent movies, I partake in the joys of online piracy and streaming. But every now and then I hear enough fantastic things about a movie that I’m inclined to go see it on the big screen. Peter Berg‘s Afghan War epic, Lone Survivor, was one such film. Dudes I trust, such as Bill Simmons, called the film “the most extraordinary war movie since Saving Private Ryan” and piled enough praise on the movie to give any moviegoer astronomical expectations. Usually, when that happens, said expectations cannot possibly be met.

Last night, I bit the bullet (PUN INTENDED!!!!) and saw the two hours of gore and glory in all of its 30 x 70 splendor. I was entertained, to be sure, and often uncomfortable. This is a violent-as-hell, bloody mess of a movie…and that’s coming from someone who has watched a lot of Sons of Anarchy.

Lone Survivor is, if nothing else, an incredibly VIVID, brutal look at what being trapped on some fucked-up cliff in Afghanistan, while being ambushed by hundred’s of turban-clad men would ACTUALLY feel like. It is not a pretty, uplifting film. No, Lone Survivor relishes each flying bullet tearing into human flesh, every human body being smacked into trees and thrown off of cliffs, every RPG obliterating what you thought was an okay hiding place. It is a gritty, violent tale of a gritty, violent reality: war. And in that way, I think the Saving Private Ryan comparisons are valid. Both films trap you in the cold, ugly reality of being a soldier in a life-or-death battle. This is not some kickass action film, no, Lone Survivor pulls no punches in making the audience startlingly aware that this film is one in which the good guys are NOT going to win, which can be inferred by the title alone. 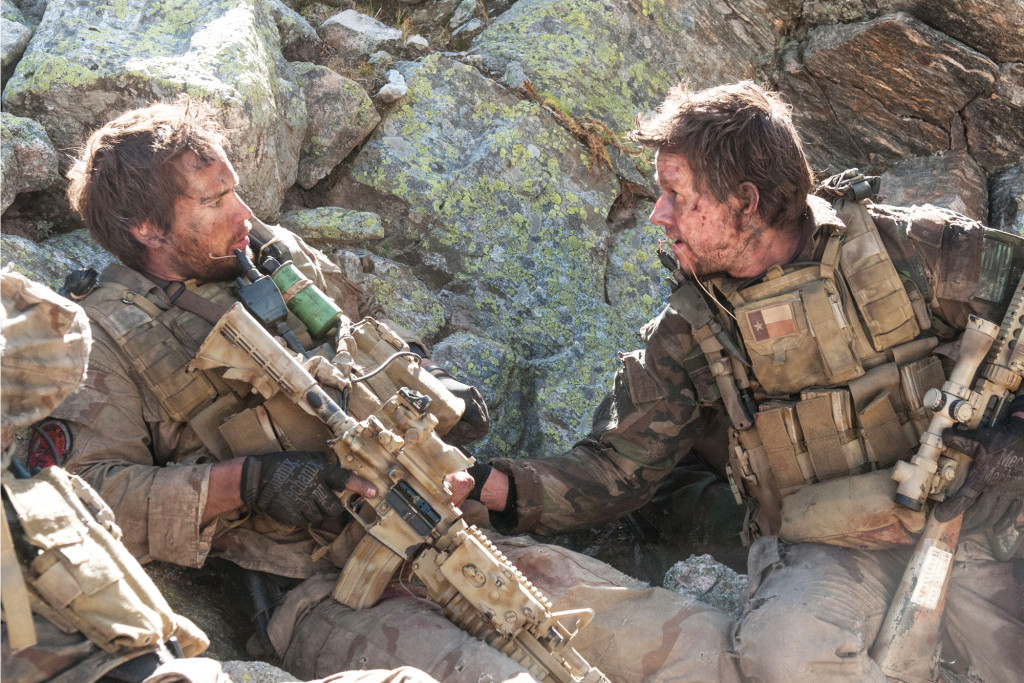 As Lone Survivor implies: not everyone is getting out alive.

Actually, this was a small nuance that bothered me about the movie. If I’d known more about the story going in, this would have been a non-issue, but for someone uninitiated to “Operation Red Wings,” the title Lone Survivor, coupled with the first two minutes of the movie, tells you EXACTLY what is going to happen and who the lone survivor is going to be (Hint: It might be the highest-paid, superstar actor). Since you know damn well that everyone but Marky-Mark (who gives an excellent performance, as always) is going to become Taliban trophies by the end of the film, it’s hard to get too attached to the characters portrayed by Emile Hirsch, Taylor Kitsch, and Ben Foster, even while all three flawlessly act their parts. Peter Berg tries to pull on your heartstrings while the soldiers discuss upcoming weddings and house-paintings and send texts in precious “boo-talk” at the film’s onset, but alas, you don’t WANT to love anyone but Wahlberg too much, since their respective fates have been established long-before you sat down in the theater.

The only other flaw I found in Lone Survivor seems pretty trivial, but really bothered me for some reason: the Navy SEALS are supposed to be America’s best and brightest super-soldiers, right? Well, in Peter Berg’s SEAL training, speaking Farsi, or being able to communicate with the Afghani people in general, is apparently eschewed. While it DOES make for the movie’s most comical scene (Wahlberg asks an Afghan boy for a knife, and instead gets something a little less useful), it seems ridiculous to me that the best soldiers America has to offer can’t speak one freaking lick of a language that could be CRITICAL to save their lives in any number of scenarios. Maybe I know nothing about the SEALS (I don’t), but I really don’t think I’m wrong on this one. It seemed ludicrous to me that not a one of the crew sent into dangerous, hostile territory could speak a word of the native tongue. You know, just in case they were to run into a group of Taliban-loyalist shepherds or something…not that that would ever happen.

Those critiques notwithstanding, I thought Lone Survivor was a great film – but not truly transcendent like the aforementioned Saving Private Ryan. Make no mistake, this movie is worth your nine dollars. It provides an honest, brutal look at war in a world depending on electronic communications, and fought with so many automatic weapons and grenades. It features terrific performances by all of the big-name actors, save a surprisingly minor, throwaway casting of Eric Bana as a commander. This film makes you feel as though you are right there with the SEALS in hostile territory and without a prayer to succeed. It is an eye-opening, visually exceptional film, without being too bogged down in artistic expression. While Lone Survivor certainly evokes the patriotism and heroism that any good American war film should, it is by no means a happy story. Not that you’d expect that with a title like Lone Survivor.

Recommended for: Americans, Men, Women with a strong stomach.

Not Recommended for: Children, Terrorists, People with PTSD.