Posted On February 5, 2014 By Staff In Issues, Miscellaneous

Science vs. Creationism Thunderdome: Why Debate is Always Good

As you may have heard, yesterday Bill Nye the Science Guy (a man of many talents) participated in a debate about evolution yesterday against Ken Ham, a well-known Young Earth creationist (more on what that is in a minute). Now, this article isn’t going to rehash the points discussed or decide on a victor. You can watch for yourself, and of course I’m going to say that I think you should. Instead, I’m going to talk about why having these debates is so important.

Some of you are probably wondering why you should care. Glad you’re here, kid! I’ll tell you. Young Earth creationism is a subset of creationism that maintains the Earth was made 6000 years ago and that humans and dinosaurs coexisted, despite the fact that there are literal mountains of evidence saying otherwise. There’s even a museum. Support for creationism in general has surprisingly been on the rise in recent decades in the United States, to the tune of 46% of Americans believing that God created humans in their present form, and only 15% supporting evolution with no divine assistance. Schools across the States—mainly in the South—are starting to present creationist-only curricula.

No matter what your beliefs are, this trend is alarming, and I’m not even dissing creationism as being illegitimate. People should be free to believe whatever feels true to them. No, it’s alarming because some schools are presenting creationist-ONLY curricula, without any access to or sometimes even mention of biological processes in textbooks. That is a terrible way to teach. Children are much smarter than we usually give them credit for and they should be given as many opportunities as possible to start thinking about different perspectives. By all means, religious private schools should be able to teach from a Biblical base, but the kids should know that there are other truths out there too. Science and religion are not incompatible! 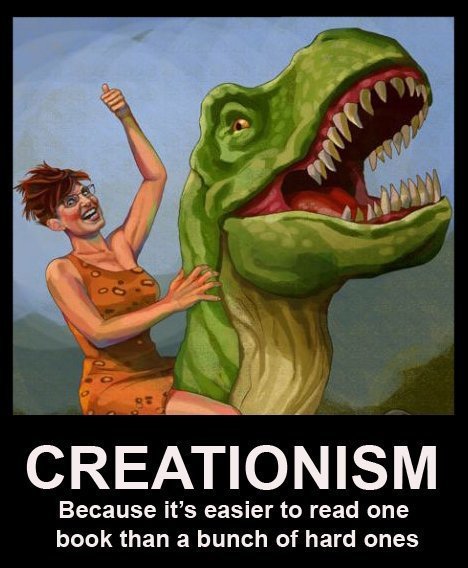 Schools should present more than one side to a story.

If evolution is dismissed wholesale for a child’s entire K-12 education, (s)he will not only lack basic understanding of the mechanism that’s been proven as fact again and again, (s)he won’t be able to think critically because (s)he has never been challenged to weigh different perspectives. This makes for a generation of completely closed-minded people. Now imagine how widespread the effects of that would be. As I’ve already ranted about, science supports us every moment of every day. You may think that once we’ve come this far we can’t go backwards, but we absolutely can. Suppressing information is frighteningly effective and reaches very far. All it takes is one generation of suppression or misinformation and the future ones won’t even know what they’ve lost.

I may sound like Chicken Little, screaming about how the sky is falling and US’ entire future is at stake if we don’t talk to each other. The bleak future I’ve just described is an extreme to be sure, but more people should know that it is indeed possible. That’s why I like that a two-way conversation is happening, and I love that it’s in the form of a good old fashioned debate. To paraphrase Carl Sagan, the reason people trust science is because it’s always under intense scrutiny. Every single discovery ever made has been tested hundreds if not thousands of times, and the ones that make it into the Hall of Fame are the ones that produce the same result every time. If you’re trying to prove a point and it falls apart once people ask questions, then it absolutely deserved to be refuted. There is no strength in mystery. There is, however, in an idea that’s been ruthlessly examined from all angles. Wouldn’t you rather take a pain killer that had been tested for ALL side effects, rather than one made by people who were too proud to look for imperfections?

Some people think that this debate is a waste of time. They say that both sides are too stubborn to listen to the other and neither one can hope to convince anyone in the opposite camp. Some who support evolution think we shouldn’t even be addressing Young Earth creationists because it legitimizes their beliefs. While I understand the objections, I think society can only benefit from a good, civil conversation. Successfully standing up to scrutiny and addressing any skepticism head-on just strengthens your argument, regardless of which camp you come from (key word successfully). I’m happy that both Bill Nye and Ken Ham participated and I hope to see people prolong the conversation. The best outcome is that people don’t forget about this debate too quickly, learned a little bit and tried to think more critically about the issue at hand. Me, I learned I need to start wearing bow ties.